Because we have a passion for our work, we support people and projects who also have the same passion. At the moment Black Box Music promotes and sponsors...
Howard Carpendale on tour

He is the last great entertainer we have in Germany. Charming and down-to-earth – this is Howard Carpendale. At the moment, he demonstrates his LIVE qualities with the successful “DAS IST UNSERE ZEIT” (THIS IS OUR TIME) tour 2015 / 2016 through Germany, Austria and Switzerland. Jointly with his eleven band members, he inspires with (more…)
Max Raabe and Palast Orchester

One thing should be pointed out beforehand: Max Raabe & Palast Orchester are great fun! It is a real pleasure to listen to and watch the ladies and gentlemen. In times of fast moving canned music, Max Raabe & Palast Orchester touch the hearts of all people who are interested in music. Classic songs from the twenties and thirties of the last century as well as own compositions are performed (more…)
Marsimoto on Tour

Marsimoto is the stage name of the THC-heavy alter ego of the rapper Marten Laciny, who is also known by the name of Marteria.The green freak, one of the split personalities of the Rostock native, who has at least three hearts beating in his chest, takes the release of what is now his fourth Marsi album, Ring der Nebelungen, as the occasion to make his way to earth and hammer it into heads in Germany, Austria and Switzerland, in a helium voice with a heavy dose of bass. (more…)
Sido on Tour 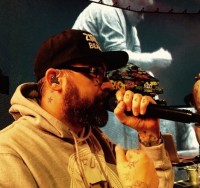 Within the German-speaking countries, Sido is among the most successful rap artists. Sido, who was born in Berlin, started doing rap music in the late nineties, took up speed starting with 2003 with his first great hit “Mein Block” (“My Block”) and has so far gained a very faithful and steadfast fan community by his performance. Besides rap music, the jack-of-all-trades has meanwhile also made his name as a very busy businessman. Besides his work as an artist, Sido has built and developed a second mainstay marketing his own vodka, managing his own tattoo studio and producing and writing for various (more…)
Marilyn Manson on tour in europe

Brian Hugh Warner, who should be known most commonly by the name of Marilyn Manson, is currently on a tour through Europe with the eponymous band Marilyn Manson, carrying in his luggage the current round bar “The Pale Emperor”. The band, which was established as early as in 1989, has gathered a worldwide (more…)
The Studio in Wing 6 is Finally Completed

It has been done; our studio on the 4th floor of Wing 6 is completed! We had made it our objective to use the 1,000 m2 floor space of our studio more reasonably. What we wanted to get is not just a large space, but a large space, a flat, a gym and some decoupled recording studios. After a short planning phase, the building work could get under way. The following spaces have been created: Now the Studio (more…)
Marius Müller-Westernhagen on Tour

Marius Müller-Westernhagen, or also simply called Westernhagen by many people, has been an established name in the music industry for many years. Almost everyone knows his distinctive voice and his and his expressive songs. Müller-Westernhagen cannot be satisfied with simple lyrics and trivial songs. He is the type to set a really high target, no matter whether his music, his band or the production is concerned. Müller-Westernhagen has always worked (more…)
Lollapalooza Festival Berlin

Extraordinary, that is definitely a good way to describe the Tempelhof Field on the former Tempelhof airport as a location, a location that is steeped in Berlin’s history. Where Raisin Bombers; or Candy Bombers as they are better known to Americans, once landed packed with essential food and goods for Berlin, this year played host to the Lollapalooza Festival, for the very first time in Europe. (more…)
MARK KNOPFLER’S Tour in the US and Canada

Telegraph Road, Sultans of Swing, Brothers in Arms, Money for Nothing and many more, all of them songs by Mark Knopfler, head of the Dire Straits. With a 120 million records sold the winner of several Grammy awards is among the top artists of the rock and pop scene. Mark Knopfler has been performing for 20 years as a solo artist and very successful at it. (more…)
IFA Sommer garden

The IFA or Internationale Funkausstellung Berlin (“Berlin Radio Show”) took place for the first time in 1924 in Berlin. As the years went by, the Berlin Radio Show, which started as a simple exhibition, developed to become one of the most important marketing events for new products in the home entertainment industry. (more…)
Seite 2 von 18«12345...10...»Letzte »